In the second of our themed blogs we’ll bring you over the coming months and years, Farmer Phil’s Festival veteran waxes lyrical about his first taste of the festival back in 2007 – his favourite Farmer Phil’s festival experience…

We first came to Farmer Phil’s in 2007 with a young son Tom (6 at the time) and daughter Scarlet AKA ‘Sunny’ (then 4).  We had a fantastic family time – the festival offered something for everyone. Since 2007 it is one of the first things all of the family want to 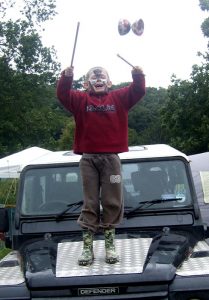 get in the calendar!  Now the kids are a bit older we can stay later watching the bands than we used to, and the music for the kids has become more interesting than the circus entertainment. It is a true family Festival and one the family can grow with.

I have attached a photo of Tom from 2008 (aged 7) when he’d just about mastered the diablo. Tom is now part of Guitar Cubed and him and his mate Louis will open the second stage at Farmer Phil’s Festival on Saturday 13 August 2016!  He’s really looking forward to being on that famous stage, but I suspect there’ll still be a bit of time throwing diablos about and trying to unicycle over the weekend!